Our Church in Harberton

St Andrew’s, Harberton is a magnificent building that has been the focus of village pride for several centuries. A brief look at its history adds new perspective to our latest efforts to maintain this treasure in our midst.

There was probably a church of some sort since Saxon times, but the first reference to our church in Harberton is in 1108 - nearly 1000 years ago. Indeed, that’s the first use of the name ‘Harberton’.

It started with a chancel, after which the parish itself was responsible for building the rest of the church, slowly constructing it over the next couple of centuries. Two terrible outbreaks of the Black Death in 1348 and 1360 - resulting in the death of a third and then a fifth of the population, can’t have sped the work…

One droll record is from 1436, when the Bishop of Exeter issued an Indulgence offering 40 days off purgatory for anyone contributing to the repairs or continuing support for the building of the parochial church of ‘Hurberton’!

The English Heritage Grade 1 Listing for St. Andrew’s (Grade I buildings are of exceptional interest - only 2.5%, about 12,500 of all buildings across England are in this top category) suggests it was probably completed by the middle of the 15th century, with the porch and tower following over the next few decades. Its splendid architecture includes a barrel roof engagingly decorated with carved mediaeval bosses, including an amusing Green Man with a twisted nose, and the heads of Richard III with his hat pulled down over his ear, and Anne, his queen. 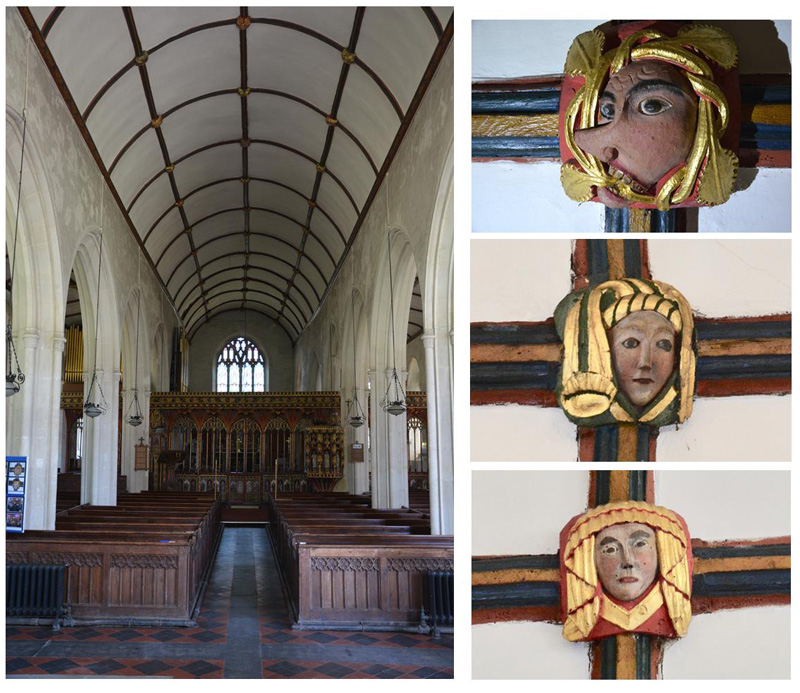 Most striking, right across the church, is the magnificent rood screen from around 1400-1450. Our screen was substantially restored and repainted in 1871, when the mediaeval panels were repainted on metal sheets, but a few of the original panels did survive, found stored above the screen during re-plastering of the church in 1965, and in a local landowner’s attic where they had been hidden since 1871.

The lofty tower at the west end of the church boasts a peal of six bells cast in 1762, but as early as 1553 the church rang four bells. The sonorous chiming clock was given in 1898 by Sir Robert Harvey of Dundridge, and has only two faces: to the south and west so that the time could not be seen by the rival landowner at Tristford to the north!

St Andrew’s, witness to the events of Harberton and its people down the ages, is filled with outstanding gems that eloquently tell its long story. There’s our oldest tangible link with its early days: the glowing 11th century carved sandstone font; the radiant windows; the poignant memorials to Tito, who died tragically in his 11th year; the rare carved stone pulpit; the imposing ‘Father Willis’ organ; the royal arms of Queen Anne - and many, many other artefacts, memorials and intriguing, beguiling details.

Follow this link to learn more of St Andrew’s history (with thanks to Stanley Oldfield).

Read more about our church history...

There are services at St Andrew’s at 9.30 on each Sunday and Wednesday. Everyone is welcome.

Our church is part of the Three Rivers Mission Community and there’s further information about services and other worship events on their site here.

Exciting News - it is here - The HUNGRY HARBERTON Cookbook.   For Sale - Friday 16 October in the marquee at the Church House Inn from 4pm to 7pm.

We had to cancel so many events because of Covid but... next year maybe?  Meanwhile, we are going to have a FESTIVAL OF L read more...

Follow this link Autumn 2020 Newsletter for the latest news and information.